A little back, I wrote this highly experimental (and primal) composition called MIRROR, in which two subconscious voices would be displayed continuously until they would collapse together and generate this sense of unifying thoughts.
That poem spawned from my fiddling with the concept of multiple voices in poetry. All my compositions are made to be both read and spoken, therefor, all kinds of sound generation are within the bounds of my poetry.

I spent some time wondering about the possibility of poems meant to be read by separate voices, which can be applied to a variety of unique poetic concepts, as well as compounding lyricism with that expression and generate a form of artistic elation of poetry upon dialogue, both internal and external.

MIRROR is not a good example, since its very primitive and faulty in the groundworks of what this exercise proposes. For the ease of division in structural compositions, I will name the first voice “Archeon” and the second voice “Bareon”, A and B for short (I’m not a smart guy). Any number of voices can be used, but in my experiments, more than two can become volatile and overbearing.

Proceeding to subdivide the purpose of these mechanisms, I’ve found three definitive usages that result in poetic progression:

a. shining locked within a chest of hope, dimming and reckless,
b. buoying docked at a sea of souls, dim and then… lightless.

a. eyes shut, where is the flame once consuming and bright?
b. not longer here, just ash, in the shade of innocent white.

(Not actual compositions, just simple demonstrations I etched up in a couple of minutes.)

You might be thinking: well, most of these could be composed with a singular voice. Yes, but their poetic momentum rests on the understanding that two separate voices are communicating an unifying symbol, so that symbol is passed through a lens of duality and then translated back into singularity.
In the case of repetition, giving a sensation of weight applied to certain parts of the conclusion. On the example, words like “locked/docked” and “reckless/lightless” double their weight, by means of stressing their permanence, and allowing their scope to encompass more than just the poetic subject, as in, a descent into a lightless reality tangible by all, inspiring the severity of ones perspective.
In the case of interrogation – the most useful of all – we can halve the stressing of the question and place it upon the answer. That bright flame once respiring consumingly? It is no more, now it has fully devoured, it is ash in its innocent form, fertile and renewing, but still a painful memory. Interrogation allows for the continuity of the poetic narrative, by means of easing the transmission of what is truly meant to be retained and what isn’t supposed to be front-line in the skeleton of the given composition.
Exposition is rather simple, and I would take mostly as a structural aid more than a duality in transmission. It is meant for internal dialogue, and it was the mechanism utilised on MIRROR. It allows for thoughts to unify in two different fronts, giving a sensation of duality when there doesn’t necessarily exist one, often times its just a case of division. Since verses seem to flow into their counterpart voices, it would be a bit too eerie to read it using two separate whole voices, but two separate tones can be utilised rather well. (more on that another day, I’m also producing another Lab with the usage of classical music tempos in poetry, i.e Alegro, Moderato, so on).

I’ve been putting off the publishing of this Lab for a while, attempting to etch decent poems that could ally to this minimal theory, but my time has been very scarce and I haven’t been able to compose anything wholesome enough for presentation. I will, therefor, leave you with MIRROR, so you have a general idea of what exposition looks like, and then create the other two during the week, and hopefully publish them as separate posts connecting to this one.
I’m sorry for the apparent laziness, but I promise that I will deliver! 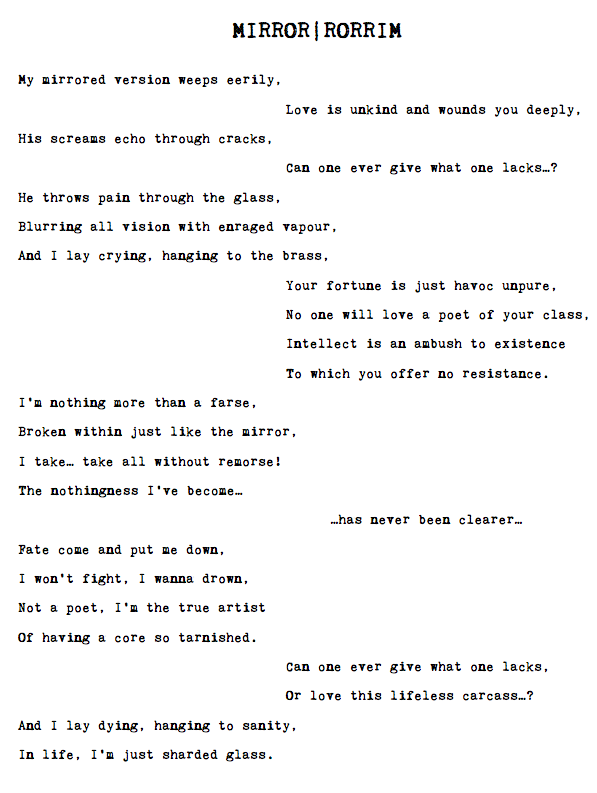 Not an actual good poem, but hey, its old.

A tick clinging to the bristles of a purple boar. View all posts by João-Maria

This site uses Akismet to reduce spam. Learn how your comment data is processed.